The New Diasporic Africa Press Edition of Hubert H. Harrison When Africa Awakes:The “Inside Story” of the Stirrings and Strivings of the New Negro in the Western World by Jeffrey B. Perry 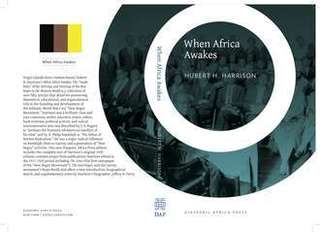 
It was made clear that this “New Negro Movement" represented a breaking away of the Negro masses from the grip of old-time leaders….

It is thus clear that, as long as the Color Line exists, all the perfumed protestations of Democracy on the part of the white race must be simply downright lying. The cant of “Democracy” is intended as dust in the eyes of white voters, incense on the altar of their own self-love. It furnishes bait for the clever statesmen who hold the destinies of their people in their hands when they go fishing for suckers in the waters of public discussion. But it becomes more and more apparent that Hindus, Egyptians, Africans, Chinese and Haytians have taken the measure of this cant and hypocrisy. And, whatever the white world may think, it will have these peoples to deal with during the twentieth century."