Theodore W. Allen The Invention of the White Race Vol. I: Racial Oppression and Social Control
Scott McLemee's Blog on Hubert Harrison at the ISO Conference in Chicago
Eric Banks, "Hubert Harrison: A Pioneering African American Book Reviewer," can be found in "Critical Mass: The Blog of the National Book Critics Board of Directors," May 8, 2009
Theodore W. Allen's, "Class Struggle and the Origin of Racial Slavery: The Invention of the White Race," editd and with an introduction by Jeffrey B. Perry.

The Invention of The White Race by Theodore W. Allen Special One Week 50% Off Sale Free Shipping and Bundled E-Book 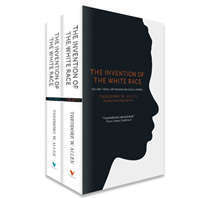 Theodore W. Allen’s The Invention of the White Race, with its focus on racial oppression and social control, is one of the twentieth-century’s major contributions to historical understanding. This two-volume classic, first published in 1994 and 1997, presents a full-scale challenge to what Allen refers to as “The Great White Assumption” – “the unquestioning, indeed unthinking acceptance of the ‘white’ identity of European-Americans of all classes as a natural attribute rather than a social construct.” Its thesis on the origin and nature of the “white race” contains the root of a new and radical approach to United States history, one that challenges master narratives taught in the media and in schools, colleges, and universities. With its equalitarian motif and emphasis on class struggle it speaks to people today who strive for change worldwide. Its influence on our understanding of American, African American, and labor history will continue to grow in the twenty-first century.

Readers of the first edition of The Invention of the White Race were startled by Allen’s bold assertion on the back cover: “When the first Africans arrived in Virginia in 1619, there were no ‘white’ people there; nor, according to the colonial records, would there be for another sixty years.” That statement, based on twenty-plus years of research of Virginia’s colonial records, reflected the fact that Allen found “no instance of the official use of the word ‘white’ as a token of social status” prior to its appearance in a Virginia law passed in 1691. As he later explained, “Others living in the colony at that time were English; they had been English when they left England, and naturally they and their Virginia-born children were English, they were not ‘white.’ White identity had to be carefully taught, and it would be only after the passage of some six crucial decades” that the word “would appear as a synonym for European-American.”

It is in the context of such findings that he offers his major thesis -- the “white race” was invented as a ruling class social control formation in response to labor solidarity as manifested in the later, civil war stages of Bacon's Rebellion (1676-77). To this he adds two important corollaries: 1) the ruling elite, in its own class interest, deliberately instituted a system of racial privileges to define and maintain the “white race” and 2) the consequences were not only ruinous to the interests of African-Americans, they were also “disastrous” for European-American workers, whose class interests differed fundamentally from those of the ruling elite.

In developing these theses Allen challenges the two main ideological props of white supremacy – the notion that “racism” is innate, and it is therefore useless to struggle against it, and the argument that European-American workers benefit from “white race” privileges and that it is in their interest not to oppose them and not to oppose white supremacy.

In an effort to assist readers and to encourage meaningful engagement with Allen’s work this new edition of The Invention Of the White Race includes new introductions, appendices, internal study guides, and expanded indexes.

For reader's comments, an introduction, the Verso Books discount offer, and a link to Volume 1: Racial Oppression and Social Control CLICK HERE

For reader's comments, an introduction, the Verso Books discount offer, and a link to Volume 2: The Origin of Racial Oppression in Anglo-America CLICK HERE

For further information on the work of Theodore W. Allen CLICK HERE

For a video of a slide presentation/talk on Allen’s “The Invention of the White Race” by Jeffrey B. Perry see