“It’s Been a Long Time Coming – And It’s Still Not Here!” On The Naming of A Street for Hubert Harrison 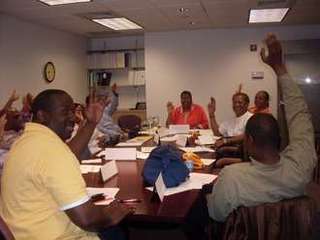 
Members of the Parks, Recreation & Transportation Committee of Community Board 10, in Harlem voted unanimously on May 11, 2011, to Co-Name 134th St. between Lenox Avenue/Malcolm X Blvd. and Adam Clayton Powell Jr., Blvd. after Hubert Harrison.

Shortly after the May 2011 vote "a moratorium" was imposed affecting that naming and the street has never officially been co-named after Hubert Harrison.

Thus, no street named after Hubert Harrison is included in the list of the Honorific Streets in New York City. 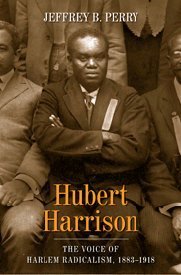 "The Developing Conjuncture and Some Insights From Hubert Harrison and Theodore W. Allen On the Centrality of the Fight Against White Supremacy" by Jeffrey B. Perry 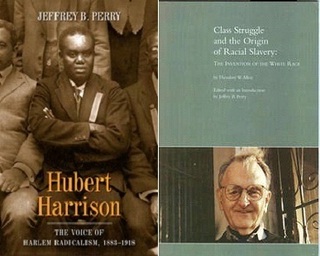 Click on Photo and Go to Top Left for the Article
The article "The Developing Conjuncture and Some Insights From Hubert Harrison and Theodore W. Allen On the Centrality of the Fight Against White Supremacy" can be found in pdf format by CLICKING HERE and GOING TO THE TOP LEFT (top left). The Table of Contents is provided below:

Table of Contents
for
"The Developing Conjuncture and Some Insights From
Hubert Harrison and Theodore W. Allen
On the Centrality of the Fight Against White Supremacy"
by
Jeffrey B. Perry

Epigraph
Introduction
Hubert Harrison
Theodore W. Allen
Harrison and Allen and the Centrality of the Struggle Against White-Supremacy
Some Class and Racial Aspects of The Conjuncture
Deepening Economic Crisis
U.S. Workers Faring Badly
White Supremacist Shaping
Wisconsin
Millions are Suffering and Conditions are Worsening
Insights from Hubert Harrison
Arrival in America, Contrast with St. Croix
Socialist Party Writings
“Southernism or Socialism – which?”
The Socialist Party Puts [the “White”] Race First and Class After
Class Consciousness, White Supremacy, and the "Duty to Champion the Cause of the Negro"
On “The Touchstone” and the Two-Fold Character of Democracy in America
Concentrated Race-Conscious Work in the Black Community
Capitalist Imperialism and the Need to Break Down Exclusion Walls of White Workers
The International Colored Unity League
Struggle Against White Supremacy is Central
Insights from Theodore W. Allen
Early Research and Writings and Pioneering Use of “White Skin Privilege” Concept
White Blindspot
Why No Socialism? . . . and The Main Retardant to Working Class Consciousness
The Role of White Supremacy in Three Previous Crises
The Great Depression . . . and the White Supremacist Response
Response to Four Arguments Against and Five “Artful Dodges”
Early 1970s Writings and Strategy
“The Invention of the White Race”
Other Important Contributions in Writings on the Colonial Period
Inventing the “White Race” and Fixing “a perpetual Brand upon Free Negros”
Political Economic Aspects of the Invention of the “White Race”
Racial Oppression and National Oppression
“Racial Slavery” and “Slavery”
Male Supremacy, Gender Oppression, and Laws Affecting the Family
Slavery as Capitalism, Slaveholders as Capitalists, Enslaved as Proletarians
Class-Conscious, Anti-White Supremacist Counter Narrative – Comments on Jordan and Morgan
Not Simply a Social Construct, But a Ruling Class Social Control Formation . . . and Comments on Roediger
The “White Race” and “White Race” Privilege
On the Bifurcation of “Labor History” and “Black History” and on the “National Question”
Later Writings . . . “Toward a Revolution in Labor History”
Strategy
The Struggle Ahead
Addendum
Read More
Be the first to comment

The Dudley Branch Library in Roxbury hosted a lecture on Hubert Harrison (1883-1927) "The Father of Harlem Radicalism" by Jeffrey B. Perry on Saturday, February 15, 2014. Also discussed was Harrison's grandson, Ray Richardson (1946-1971), the former producer of "Say Brother" on WGBH in Boston.

This video and article on the event was prepared by Glennon L. King, Globe correspondent. Read More
Be the first to comment 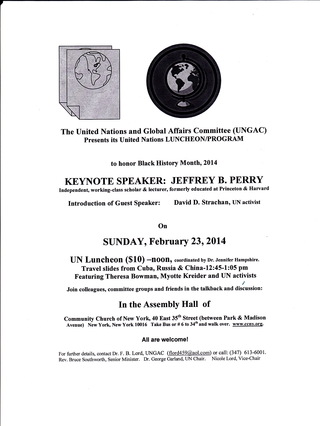 Hubert Harrison, Theodore W. Allen,
and "The Invention of the White Race"
Sunday, February 23, 2014
February 23, 2014
Sunday, 12:45 to 3:00 P.M., Theodore W. Allen's The Invention of the White Race (Verso Books) especially Volume 2 The Origin of Racial Oppression in Anglo-America will be discussed by Jeffrey B. Perry in a slide presentation/talk at The Community Church of New York, 40 E. 35th St., New York, NY. Contact person David Strachan. Read More
Be the first to comment

Mark Solomon on The Invention of the White Race by Theodore W. Allen 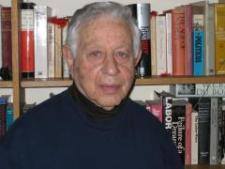 “The notion of a ‘post racial’ society today has been obliterated by recurring assaults and killing of African Americans by whites virtually immune from prosecution – echoing the searing racism of the infamous Dred Scott decision that Blacks ‘had no rights which the white man was bound to respect.’ That heinous white supremacy compels a need to understand its historic roots, so essential to fighting it. Theodore Allen’s The Invention of the White Race is a groundbreaking contribution to that understanding. With exhaustive scholarship, Allen demonstrates that there were no ‘white people’ in the early years of 17th century colonization. After labor unrest shook the Virginia colony, the ruling class responded by inventing the white race replete with ‘white skin privilege.’ It created a lethal means of social control by dividing workers, institutionalizing white supremacy as an historic source of class collaboration – producing the principal retardant to progressive social change. The profound insights in The Invention of the White Race are essential both to understand the origins and destructiveness of white supremacy and to provide the means to conduct struggle against it. Allen’s study is mandatory reading for everyone concerned with justice, equality and the liberation of all from the binds of white supremacy.”
Mark Solomon
W.E.B. Du Bois Institute for African and African American Research
Harvard University

For more comments by activists and scholars on Theodore W. Allen’s The Invention of the White Race, Vol. 2: The Origin of Racial Oppression in Anglo-America CLICK HERE Read More
Be the first to comment 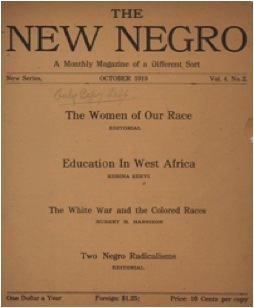 1919 -- Hubert H. Harrison edits The New Negro: A Monthly Magazine of a Different Sort (1919) -- “intended as an organ of the international consciousness of the darker races -- especially of the Negro race.”

1920 -- Hubert H. Harrison authors When Africa Awakes: The "Inside Story of the Stirrings and Strivings of the New Negro in the Western World"

1925 -- Alain LeRoy Locke edits The New Negro: An Interpretation (1925) Read More
Be the first to comment

Jeffrey B. Perry Discusses Hubert Harrison at the Center for Marxist Education in Cambridge, Mass., 16 February 2014.

Tags: Words or phrases to categorize this post for the tags section
Jeffrey B. Perry discusses Hubert Harrison at the Center for Marxist Education in Cambridge, Mass., 16 February 2014. Video recorded by Enaa Doug Greene.

Hubert Harrison, (1883-1927) was an immensely skilled writer, orator, educator, critic, and political activist who, more than any other political leader of his era, combined class consciousness and anti-white-supremacist race consciousness into a coherent political radicalism. The St. Croix, Virgin Islands-born and Harlem-based Harrison profoundly influenced "New Negro" militants, including A. Philip Randolph and Marcus Garvey, and his synthesis of class and race issues is a key unifying link between the two great trends of the Black Liberation Movement: the labor- and civil-rights-based work of Martin Luther King Jr. and the race and nationalist work associated with Malcolm X.

Harrison played unique, signal roles in the largest class radical movement (socialism) and the largest race radical movement (the New Negro/Garvey) movement of his era. He was the foremost Black organizer, agitator, and theoretician of the Socialist Party of New York, the founder of the "New Negro" movement, the editor of the "Negro World," and the principal radical influence on the Garvey movement. A self-described, "radical internationalist," he was also a highly praised journalist and critic (reportedly the first regular Black book reviewer), a postal labor unionist, a union organizer (with both the Hotel Workers and the Pullman Porters), an IWW supporter, a speaker at the 1913 Paterson strike, a freethinker and early proponent of birth control, a supporter of Black writers and artists, a leading community-based public intellectual, an adult education lecturer for the New York City Board of Education, and a bibliophile who helped transform the 135th Street Public Library into an international center for research in Black culture (known today as the world-famous Schomburg Center for Research in Black Culture). His biography offers profound insights on race, class, religion, immigration, war, democracy, and social change in America.

For more information on Jeff Perry's work, see his website.
Read More
Be the first to comment