Article in "The Herald" of Zimbabwe of February 29, 2016 on Hubert Harrison, "When Arica Awakes: The 'Inside Story' of the Stirings and Strivings of the New Negro in the Western World" (1920; Diasportic Africa Press, 2015), edited with New Introductions and Notes by Jeffrey B. Perry. -- Fom Pambazuka Press

Hubert H. Harrison’s
When Africa Awakes:
The "Inside Story" of the Stirrings and Strivings
of the New Negro in the Western World
(Diasporic Africa Press)
by Jeffrey B. Perry
Black Agenda Report
December 21, 2015

It was made clear that this ‘New Negro Movement’ represented a breaking away of the Negro masses from the grip of old-time leaders….

It is thus clear that, as long as the Color Line exists, all the perfumed protestations of Democracy on the part of the white race must be simply downright lying. The cant of “Democracy” is intended as dust in the eyes of white voters, incense on the altar of their own self-love. It furnishes bait for the clever statesmen who hold the destinies of their people in their hands when they go fishing for suckers in the waters of public discussion. But it becomes more and more apparent that Hindus, Egyptians, Africans, Chinese and Haytians have taken the measure of this cant and hypocrisy. And, whatever the white world may think, it will have these peoples to deal with.... 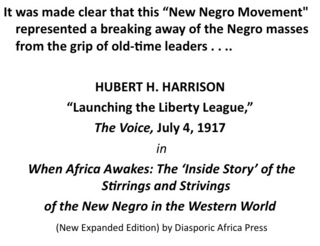 When Africa Awakes: The "Inside Story" of the Stirrings and Strivings of the New Negro in the Western World 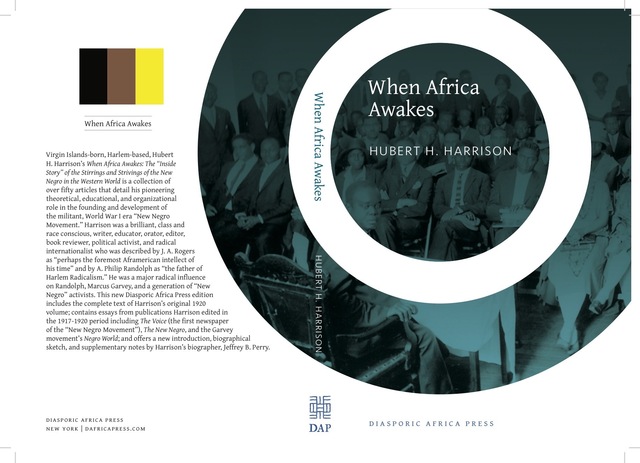 When Africa Awakes:
The ‘Inside Story’ of the Stirrings and Strivings
of the New Negro in the Western World
by Hubert H. Harrison
with new introduction, biographical sketch,
and supplementary notes
by Jeffrey B. Perry
(Diasporic Africa Press)
ISBN 9781937306274

ISBN-13: 978-1937306274
Brand New Expanded Edition of Hubert Harrison’s
When Africa Awakes:
The ‘Inside Story’ of the Stirrings and Strivings
of the New Negro in the Western World
with a new introduction, biographical sketch,
and supplementary notes
by Jeffrey B. Perry
(Diasporic Africa Press)

Virgin Islands-born, Harlem-based, Hubert H. Harrison's When Africa Awakes: The "Inside Story" of the Stirrings and Strivings of the New Negro in the Western World is a collection of over fifty articles that detail his pioneering theoretical, educational, and organizational role in the founding and development of the militant, World War I era "New Negro Movement." Harrison was a brilliant, class and race conscious, writer, educator, orator, editor, book reviewer, political activist, and radical internationalist who was described by J. A. Rogers as "perhaps the foremost Aframerican intellect of his time" and by A. Philip Randolph as "the father of Harlem Radicalism." He was a major radical influence on Randolph, Marcus Garvey, and a generation of "New Negro" activists. This new Diasporic Africa Press edition includes the complete text of Harrison's original 1920 volume; contains essays from publications Harrison edited in the 1917-1920 period including The Voice (the first newspaper of the "New Negro Movement"), The New Negro, and the Garvey movement's Negro World; and offers a new introduction, biographical sketch, and supplementary notes by Harrison's biographer, Jeffrey B. Perry.

2. DEMOCRACY AND RACE FRICTION 14
The East St. Louis Horror.—“Arms and the Man.”—The Negro and the Labor Unions.—Lynching: Its Cause and Cure.

3. THE NEGRO AND THE WAR 26
Is Democracy Unpatriotic?—Why is the Red Cross? —A Hint of “Our Reward.”—The Negro at the Peace Congress.—Africa and the Peace.—“They Shall Not Pass.”—A Cure for the Ku-Klux.

4. THE NEW POLITICS 39
The New Politics for the New Negro—The Drift In Politics.—A Negro for President. —When the Tail Wags the Dog. —The Grand Old Party.

5. THE PROBLEMS OF LEADERSHIP 54
Our Professional “Friends.”—Shillady Resigns.—Our White Friends. —A Tender Point. —The Descent of Du Bois. — When the Blind Lead.—Just Crabs.

6. THE NEW RACE - CONSCIOUSNESS 76
The Negro's Own Radicalism.— Race First versus Class First. —– An Open Letter to the Socialist Party.— Patronize Your Own.”—The Women of Our Race.—To the Young Men of My Race.

8. EUCATION AND THE RACE 123
Reading for Knowledge.—Education and the Race.—The Racial Roots of Culture.—The New Knowledge for The New Negro.

9. A FEW BOOKS 135
The Negro in History and Civilization.—Darkwater.—The Rising Tide of Color Against White World-Supremacy.


EPILOGUE: THE BLACK MAN'S BURDEN; A Reply to Rudyard Kipling 145 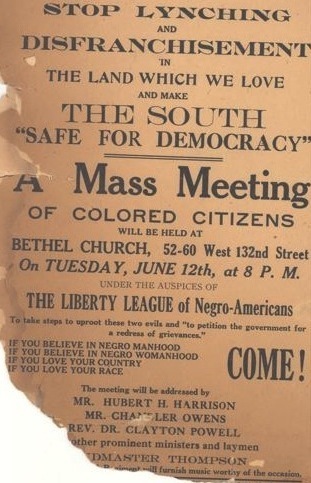 Scheduled speakers at the event included Harrison, the young activist Chandler Owen, Dr. Adam Clayton Powell, Sr. (the pastor of the Abyssinian Baptist Church on West 40th St.), and other prominent ministers and laymen. Other speakers included a young lawyer, James C. Thomas, Jr. who, later in the year, would run unsuccessfully for Alderman in Manhattan’s 26th district, and Marcus Garvey, a relatively unknown former printer from Jamaica, who had spent some time in Costa Rica, England, and touring the United States. Harrison made clear that this “New Negro Movement” was “a breaking away of the Negro masses from the grip of old-time leaders--none of whom was represented.”

The Liberty League, in June 1917, adopted a tricolor flag. Because of the “Negro’s” “dual relationship to our own and other peoples,” explained Harrison, “[we] adopted as our emblem the three colors, black brown and yellow, in perpendicular stripes.” These colors were chosen because the “black, brown and yellow, [were] symbolic of the three colors of the Negro race in America.” They were also, he suggested, symbolic of people of color world-wide. It was from this black, brown, and yellow tri-color that Marcus Garvey would later, according to Harrison, draw the idea for the red, black, and green tri-color racial flag which the UNIA would popularize, and which later would become identified as Black liberation colors.

While the June 12 meeting at Bethel Church formally founded the Liberty League it was a July 4, 1917, rally at the Metropolitan Baptist Church on 138th Street between Lenox and Seventh Avenues, which drew national attention to the organization and saw the first edition of the Hubert Harrison edited newspaper The Voice: A Newspaper for the New Negro.

The Liberty League, in June 1917, adopted a tricolor flag. Because of the “Negro’s” “dual relationship to our own and other peoples,” explained Harrison, “[we] adopted as our emblem the three colors, black brown and yellow, in perpendicular stripes.” These colors were chosen because the “black, brown and yellow, [were] symbolic of the three colors of the Negro race in America.” They were also, he suggested, symbolic of people of color world-wide.

On July 4, 1917, The Voice: A Newspaper for the New Negro—the first newspaper of the “New Negro Movement,” edited by Hubert H. Harrison—made its debut at a rally at the Metropolitan Baptist Church at 120 W. 138th Street, between Lenox and Seventh Avenues in Harlem.

The rally was called by Harrison’s Liberty League (which was the first organization of the “New Negro Movement” and which Marcus Garvey and many other activists joined). The rally drew national attention as it protested against lynching, segregation, and disfranchisement.

The protest rally came in the wake of two series of white supremacist pogroms (from May 27–May 30 and July 1–3, 1917) against the African American community of East St. Louis, Illinois. Estimates of the number of African Americans killed in East St. Louis ranged from 39 to 250 and the attacks were widely attributed to “white” labor’s opposition to Black workers.

At the rally Harrison reportedly said, “They are saying a great deal about democracy in Washington now,” but, “while they are talking about fighting for freedom and the Stars and Stripes, here at home the white apply the torch to the black men’s homes, and bullets, clubs and stones to their bodies.”

According to the New York Times, Harrison received great applause when he declared that “the time had come for the Negroes [to] do what white men who were threatened did, look out for themselves, and kill rather than submit to be killed.” He was quoted as saying, “We intend to fight if we must . . . for the things dearest to us, for our hearths and homes,” and he encouraged Black people everywhere who did not enjoy the protection of the law “to arm for their own defense, to hide their arms, and to learn how to use them.”

As he later put it, “‘An eye for an eye, a tooth for a tooth,’ and sometimes two eyes or a half dozen teeth for one is the aim of the New Negro.”

Read about the Founding of the Liberty League and The Voice in When Africa Awakes: The "Inside Story" of the Stirrings and Strivings of the New Negro in the Western World by Hubert H. Harrison, New Expanded Edition from Diasporic Africa Press with Introduction, Biographical Sketch, and Supplemental Notes by Jeffrey B. Perry.