Ray Richardson Speaking in 1969 after one year of "Say Brother" 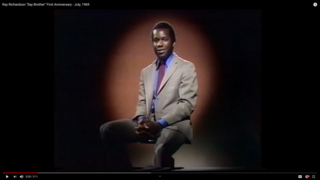 Ray Richardson Speaking in 1969 after one year of "Say Brother"

This striking 1969 video presentation is of Ray Richardson, grandson of Hubert Harrison and producer of "Say Brother" for Public Station WGBH TV (Boston) in 1968-1969.

On August 25, 2020 (August 27 in the print edition), the "New York Times" ran an article entitled "'Soul!' Brought Black Culture to TV in 1968. A New Doc Tells Its Story" that discusses the New York City public education tv show "Soul" that began on September 12, 1968 (after the April 4, 1968 assassination of Martin Luther King, Jr.). [The article is entitled "Black Culture Front and Center Back in the Day" in the print edition.]

Earlier that year (on July 18, 1968) Boston Public Television station WGBH began airing "Say Brother" an extraordinary hour-long show that, would air prime time (and be repeated later on the weekend). It was directed by Ray Richardson and directed by Stan Lathan. Richardson was the grandson of Hubert Harrison and he and Vashti Lowns would die under suspicious conditions in 1971 after the show was taken off the air and Richardson was fired in July 1970 in the wake of the show's coverage of New Bedford, Massachusetts protests.

Unfortunately, the links cited in the above article were moved. Two video clips from "Say Brother" are available Here

Blurbs for "Hubert Harrison: The Stuggle fo Equality, 1918-1927" Have Started to Come In