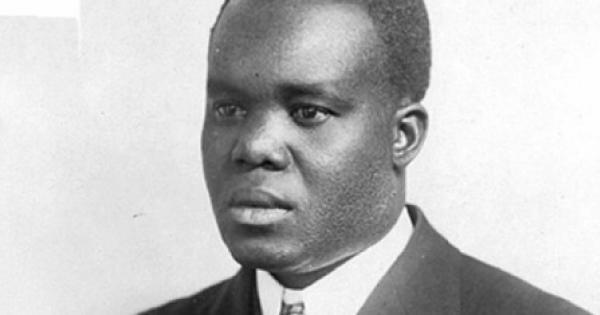 On July 4, 1917, at a Harlem Rally St. Croix-born Hubert Harrison put out a call for armed self-defense in the face of white supremacist attacks (such as the recent "pogrom" in East St. Louis, Illinois) and distributed the first edition of "The Voice: A Newspaper for the New Negro," which was the first newspaper of the militant "New Negro Movement."

104 – Years Ago -- A July 4, 1917 rally of Hubert Harrison's Liberty League at Harlem's Metropolitan Baptist Church on 138th Street between Lenox and Seventh Avenues drew national attention and saw the first edition of "The Voice: A Newspaper for the New Negro." Harrison's Liberty League was the first organization of the militant "New Negro Movement" and his newspaper, "The Voice," was the first newspaper of the movement and a prime example of the militant new spirit that was developing.

It "really crystallized the radicalism of the Negro in New York and its environs" wrote Montserrat-born Hodge Kirnon. Historian Robert A. Hill points out that Harrison's Voice was "the radical forerunner" of the periodicals that would express the developing political and intellectual ferment in the era of World War I. It was followed in November 1917 by the "Messenger" of A. Philip Randolph and Chandler Owen and in August 1918 by the "Negro World" of Marcus Garvey and the "Crusader" of Cyril Briggs. These four publications, led by "The Voice," manifested "the principal articulation of the New Negro mood."

The July 4 meeting came in the wake of the July 1-3 white supremacist pogrom in East St. Louis, Illinois (which is 12 miles from Ferguson, Missouri). Reports on the number of African Americans killed ranged from thirty-nine to two-hundred-and-fifty and 244 buildings were totally or partially destroyed. Historian Edward Robb Ellis reports that in East St. Louis Black women were scalped and four Black children slaughtered.

These riots were widely attributed to "white" labor's opposition to Black workers coming into the labor market and they were directly precipitated by a car of white "joy riders" who fired guns into the African-American community. Officials of organized labor served as prominent apologists for "white" labor's role in the rioting. Samuel Gompers, President of the American Federation of Labor, placed principal blame for the riots on "the excessive and abnormal number of negroes" in East St. Louis while W. S. Carter, President of the Brotherhood of Locomotive Firemen and Enginemen, maintained that "the purpose of the railroads in importing Negro labor is to destroy the influence of white men's labor organizations."

A subsequent House of Representatives committee found that the local police and Illinois National Guard were inept and indifferent, and, in specific instances, supported the white mobs.

The Liberty League's July 4 meeting in the largest church in Harlem came one day after a "race riot" in the San Juan Hill section of Manhattan (the third in six weeks) in which two thousand people fought after a reserve policemen arrested a uniformed Black soldier standing on a street corner who allegedly refused to move fast enough.

The "New York Times" reported that at the July 4 Liberty League rally a thousand Black men and women were present and enthusiastically cheered the speakers who were "all Negroes." Every speaker was reported to have denounced the East St. Louis rioters as ruthless murderers and each condemned the authorities for not preventing the atrocities and for not providing protection.

Edgar M. Grey, secretary of the Liberty League, chaired the July 4 meeting. He informed the audience that the League had sent its message to Congress and appealed for a thorough and impartial investigation of East St. Louis, of the lynching of African Americans, and of treatment of Black people throughout the land.

As president of the Liberty League, Harrison advised Black people who feared mob violence in the South and elsewhere to take direct action and "supply themselves with rifles and fight if necessary, to defend their lives and property." According to the "Times" he received great applause when he declared that "the time had come for the Negroes [to] do what white men who were threatened did, look out for themselves, and kill rather than submit to be killed."

He was quoted as saying: "We intend to fight if we must . . . for the things dearest to us, for our hearths and homes" and he encouraged Black people everywhere who did not enjoy the protection of the law "to arm for their own defense, to hide their arms, and to learn how to use them." He also called for a collection of money to buy rifles for those who could not obtain them, emphasizing that "Negroes in New York cannot afford to lie down in the face of this" because "East St. Louis touches us too nearly."

As he later put it -- "'An eye for an eye, a tooth for a tooth,' and sometimes two eyes or a half dozen teeth for one is the aim of the New Negro." Harrison stressed that it was imperative to "demand justice" and to "make our voices heard."

The emphasis on a political voice ran across the masthead of "The Voice," which proclaimed "We will fight for all the things we have held nearest our hearts--for democracy--for the right of those who submit to authority to have a voice in their own government."

This call for armed self-defense and the desire to have the political voice of the militant New Negro heard marked Harrison's activities in 1917.

"The Voice's" editorial on "The East St. Louis Horror" argued that although the nation was at war to make the world "safe for democracy," until the nation was made safe for African Americans, they would refuse to believe in the country's democratic assertions. Harrison stressed that "New Negroes" would not re-echo "patriotic protestations of the boot-licking leaders whose pockets and positions testify to the power of the white man's gold" and, despite what Black people might be forced by law to say publicly, "the resentment in their hearts will not down." Then he described the core feeling of the new militancy developing in the wake of East St. Louis:

". . . Unbeknown to the white people of this land a temper is being developed among Negroes with which the American people will have to reckon.

At the present moment it takes this form: If white men are to kill unoffending Negroes, Negroes must kill white men in defense of their lives and property. This is the lesson of the East St. Louis massacre."

and see Hubert H. Harrison, "When Africa Awakes: The 'Inside Story' of the Stirrings and Strivings of the New Negro in the Western World" HERE