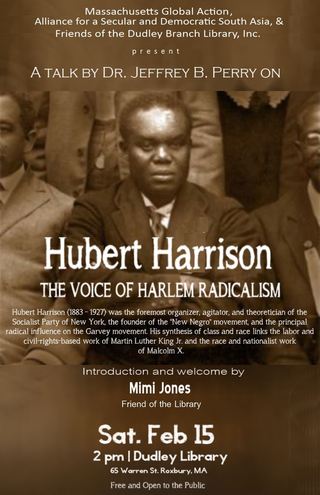 To view the program live tune in to "BNN TV's News & Information Channel: Comcast 9 / RCN 15" or tune in to the BNN TV video library online by CLICKING HERE

This event was hosted by Mimi Jones and sponsored by Friends of the Dudley Library, Alliance for a Secular and Democratic South Asia, and Massachusetts Global Action. Contact people included Mirna Lascano, Umang Kumar, and Charlie Welch in addition to Mimi Jones.

The video was prepared and edited by Justin D. Shannahan, Production Manager, Ted Lewis, cameraman, and Laura Kerivan, copy editor for Boston Neighborhood Network Television. Special thanks to Nia Grace, "Director of Marketing and Community Outreach for BNN TV for helping to make this video available.

Also discussed in the portion of the longer video that was edited out was a brief discussion of Hubert Harrison's grandson, Ray Richardson (1946-1971), the former producer of "Say Brother" on WGBH in Boston. See http://www.blackagendareport.com/content/radicalization-ray-richardson-suspicion-still-surrounds-death-black-activist-tv-producer

For additional information on Hubert Harrison CLICKHERE and HERE

Note: The presentation and Q and A lasted over 2 hours. The TV station edited it down to this length. There was much more presentation and discussion. Also, the crowd was remarkable since the event was at the highpoint of the big snowstorm, the governor was telling people to stay off the roads, and the public library closed early (only leaving a door open to the auditorium where this event was held). Those who made it to and stayed through the event were determined and this was manifested in their interest during the presentation, the lengthy Q and A period (some of which was cut), and much informal discussion that went on into the evening.