J. A. Rogers on Hubert Harrison from "World's Great Men of Color" 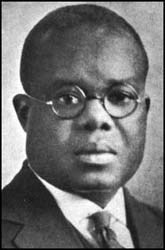 That individuals of genuine worth and immense potentialities who dedicate their lives to the advancement of their fellowmen are permitted to pass unrecognized and unrewarded from the scene, while others, inferior to them in ability and altruism, receive acclaim, wealth, and distinction, is common -- yet it never ceases to shock all but the confirmed cynic. Those with a sense of right and wrong, of fitness and incongruity -- whether they be wise men or fools -- will forever feel that this ought not to be.

Shakespeare was so little regarded during his lifetime that no one bothered to record the details of his life, and today most of what is said about him is pure conjecture. Gregor Mendel, whose experiments were to revolutionize biology and agriculture, was practically unknown until sixty years after his death. Of course, there are some of genuine worth who do not die obscure and who do win gradual recognition while alive. But why are so many whom we feel really ought to be up, down; and why are so many who certainly ought to be down, up?

Hubert Henry Harrison is the case in point. Harrison was not only perhaps the foremost Afro-American intellect of his time, but one of America's greatest minds. No one worked more seriously and indefatigably to enlighten his fellowmen; none of the Afro-American leaders of his time had a saner and more effective program -- but others, unquestionably his inferiors, received the recognition that was his due. Even today but a very small proportion of the Negro intelligentsia has ever heard of him.