The Developing Conjuncture and Some Insights from Hubert Harrison and Theodore W. Allen on the Centrality of the Fight Against White Supremacy 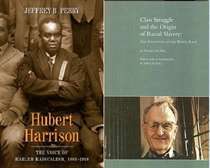 Hubert H. Harrison
and
Theodore W. Allen
In recent years the gap between rich and poor in the United States has grown to record proportions while stark racial disparities have persisted and in many instances increased. Millions of poor and working people are suffering and conditions are getting worse, particularly for Black and Latino people. This is happening at a time when the U.S. Census Bureau is predicting that “minorities” will comprise more than half of all children by 2023 and the majority of the population by 2042 and at a time when poor and working people domestically and internationally are showing an increased willingness to protest against exploitation and oppression.

While there are many factors affecting the current situation it is instructive to review some class and racial aspects of the developing conjuncture in the United States and to do so in the context of insights drawn from the lives and work of Hubert H. Harrison (1883-1927) and Theodore W. Allen (1919-2005). Harrison and Allen were working-class intellectual/activists who focused on the centrality of the fight against white supremacy and they are two of the twentieth-century’s most important writers on race and class. In the belief that their work has much to offer scholars, activists, and readers today, this essay presents an introduction to Harrison and Allen followed by a brief look at the developing conjuncture and a lengthier discussion of some insights from their lives and work.

For more see -- "The Developing Conjuncture and Some Insights from Hubert Harrison and Theodore W. Allen on the Centrality of the Fight Against White Supremacy" by Jeffrey B. Perry in Cultural Logic, Special Issue: Culture and Crisis, available HERE and HERE