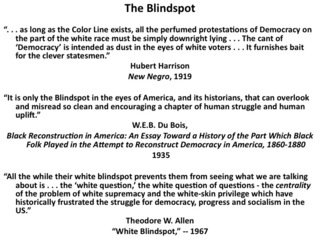 “. . . as long as the Color Line exists, all the perfumed protestations of Democracy on the part of the white race must be simply downright lying . . . The cant of ‘Democracy’ is intended as dust in the eyes of white voters . . . It furnishes bait for the clever statesmen.”
Hubert Harrison
New Negro, 1919

“It is only the Blindspot in the eyes of America, and its historians, that can overlook and misread so clean and encouraging a chapter of human struggle and human uplift.”
W.E.B. Du Bois
Black Reconstruction in America:
An Essay Toward a History of the Part Which Black Folk Played
in the Attempt to Reconstruct Democracy in America, 1860-1880
1935

“All the while their white blindspot prevents them from seeing what we are talking about is . . . the ‘white question,’ the white question of questions - the centrality of the problem of white supremacy and the white-skin privilege which have historically frustrated the struggle for democracy, progress and socialism in the US.”
Theodore W. Allen
White Blindspot, 1967
Read More
Be the first to comment