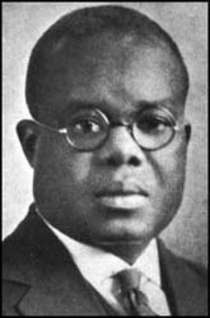 To the editor of The New York Times

Charles Blow (September 14) writes of the “Occupy Wall Street Legacy” “ingraining in the national conscience the idea that our extreme levels of inequality are politically untenable and morally unacceptable.” Background to that legacy – the message and the occupation of Wall Street – goes back over one hundred years.

Exactly 101 years ago (on September 14, 1912) in “Enlightening Wall Street” the New York Times reported that “Hubert Harrison, an eloquent and forceful negro speaker, shattered all records for distance in an address on Socialism in front of the Stock Exchange building yesterday.” His “voice carried to the furthermost limits of the crowd,” he “was still going strong, at the beginning of the third hour,” and he continued on until “the big gong in the Exchange announced the closing.”

Hubert Harrison (1883-1927) was a brilliant writer, orator, editor and political activist who was described by J. A. Rogers as “the foremost Afro-American intellect of his time” and by A. Philip Randolph as “the father of Harlem Radicalism.” Arthur Schomburg eulogized at Harrison’s funeral that he “was ahead of his time.” Schomburg was correct – and we have much to learn today from the life and work of Hubert Harrison who over 100 years ago delivered an important egalitarian message while seeking to have his audience occupy Wall Street.

For the New York Times article from 1912 CLICK HERE

The New York Times did not publish this letter.
Read More
Be the first to comment