40th Anniversary of Postal Wildcat Strike of 1978 Let Us Not Forget! 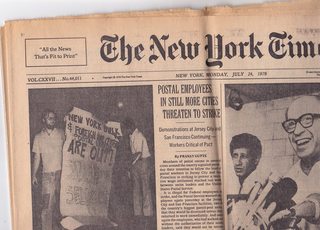 Let Us Not Forget! – Forty years ago, at midnight on July 20/21, 1978, national postal contracts expired. In the early morning hours of July 21st at the 1.8 million square foot New York Bulk & Foreign Mail Center in Jersey City, the largest postal facility in the world at that time, an informational picket line went up.

Postal workers carried signs of “No Contract, No Work,” a slogan endorsed by the three major postal unions (the American Postal Workers Union, the National Association of Letter Carriers, and the National Post Office Mail Handlers [division of LIUNA]) and a slogan that was the official position of their joint Labor Negotiating Committee. Conditions were oppressive, particularly at the Bulk, and pressing worker issues involved safety, wages, mandatory overtime, COLA, racial and gender discrimination, and the right to strike.

With conditions as bad as they were, and in the political climate that had been created around the contract, it didn’t take much to close the 4,000-worker Bulk Mail facility by the time workers started arriving for the 6 a.m. day shift. Ninety percent of the day shift workers did not report to work and the temperatures that day went into the 90s. Afternoon and evening shifts also stayed out.

The wildcat strike grew and spread quickly to the San Francisco Bulk Mail Center (in Richmond, CA,). There were also walkouts at the Kearney, NJ Mail Processing Center; the Washington, D.C. BMC, and in Philadelphia; and sporadic protests in Chicago, Allentown, Pennsylvania, Miami, and Los Angeles.

The wildcat strike was broken after five days. Postal management fired 125 workers, suspended 130, and issued letters of warning to 2,500. Among those striking postal workers were a number of valiant working class fighters who are no longer with us including Drake Waller, Dave Cline, Clarence Fitch, Grady Fitzgerald, and Al Mancuso. Worker consciousness was raised in the struggle, the proposed contracts were rejected by union members, and an arbitrated settlement was ultimately imposed that retained the uncapped COLA that workers demanded and weakened no layoff protections as management wanted.

The 1978 wildcat strike was the largest federal employees strike since the 1970 walkout by 173,000 postal workers and it would not be surpassed until the August 1981 strike of 11,500 members of the Professional Air Traffic Controllers Organization (PATCO).

The full stories of the 1978 postal wildcat and related struggles are still to be told. People interested in more on the 1978 strike may want to look at:

For a brief discussion of some of the work subsequently done by Mail Handlers from the Jersey City Bulk Mail Center at the branch, local, and national levels see “The Centrality of the Struggle Against White Supremacy -- THE MAIL HANDLERS UNION AND THE FIGHT AGAINST RACISM at the National and at the Grass Roots Level Notes From a Talk By the Treasurer of Local 300” at the Labor Notes Conference, Sunday May 21, 1989, Detroit, Michigan SEE HERE