Robert Greene II Reviews Hubert Harrison Biography Paramus Post article "Jeffrey B. Perry, A Spartan Who Took a Different Path" July 4, 1917 Rally of Hubert Harrison's Liberty League One Hundred Years Ago Hubert Harrison Wrote... "Wanted--A Colored International" Hubert Harrison is Discussed by Brent Hayes Edwards, Thai Jones, and Jeffrey B. Perry in a Columbia University Rare Book and Manuscript Library Program Let Us Not Forget! – Forty-two years ago, at midnight on July 20/21, 1978, nationl postal contracts expired “Hubert Harrison: The Struggle for Equality, 1918-1927” by Jeffrey B. Perry -- Save 20% with Columbia University Press Coupon Code “CUP20” Jeffrey B. Perry, "Labor Notes" Talk on The Centrality of Struggle Against White Supremacy, May 21, 1989 Charles Richardson Review of "A Hubert Harrison Reader," May 10, 2001 April 27th Was the 137th Anniversary of the Birth Of Hubert Harrison Forthcoming -- "Hubert Harrison: The Struggle for Equality.1918-1927" Ed Mills, "Perry Starred on, off Athletic Field: Paramus Standout Now a Historian" Where are they now?, "The Record," May 26, 2015 Talk on Theodore W. Allen's "The Invention of the White Race," January 31, 2013 Hubert H. Harrison, "When Africa Awakes: The 'Inside Story' of the Stirrings nd Strivings of the New Negro in the Western World" (2015 edition)

Charles Richardson Review of "A Hubert Harrison Reader," May 6, 2001 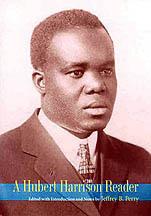 New York, New York... After more than 18 years of research and preparation, biographer and chronicler Jeff Perry has completed "A Hubert Harrison Reader," his literary investigation into the life and times of one of the greatest Black intellectuals of the 20th century. Known as the father of Harlem radicalism, and considered by historian J. A. Rogers as the "the foremost Afro-American intellect of his time," Hubert Harrison was a brilliant writer, orator, educator, critic and political activist in New York City during the 1910s and 1920s. His untimely death in 1927 quieted a voice that influenced a generation of World War I-era activists from A. Philip Randolph to Marcus Garvey.

Published by Wesleyan University Press, "A Hubert Harrison Reader," is an individually introduced and annotated collection of one hundred thirty-eight (138) articles that offer a comprehensive presentation of Harrison's writings on issues as diverse as Black leadership and leaders, class and race consciousness, the labor movement, the New Negro movement, religion, education, and politics to international events, Caribbean topics, the Virgin Islands, literature and literary criticism, and the Black theater.

"In many ways, my work on Harrison has been like having a dialogue with one of the greatest intellectuals and social activists in U.S. history," comments Perry. "During my research, I discovered that, among Black leaders, Harrison offered an alternative leadership vision to those put forth by Booker T. Washington, W.E.B. Du Bois, and Marcus Garvey. I also learned that he strongly and systematically emphasized that African Americans needed to develop race consciousness as a counter to white supremacy, even before Garvey!"

"A Hubert Harrison Reader" has been compiled from long-lost copies of printed essays, reviews, and diaries in Harrison's previously unknown personal library collection, and also includes a masterful, overall introduction as well as short, perceptive intros to Harrison's individual essays and reviews.

Scholars, students and readers interested in African American and Caribbean Studies, Labor History and Social Movements anticipate that the publication of this ground-breaking collection of writings will reshape traditional understandings of American history and Black leadership, particularly as it relates to interpretations of the 'New Negro Movement' and the Harlem Renaissance.

According to historian Ernest Allen, Jr., Associate-Chair, Afro-American Studies Department, University of Massachusetts at Amherst, "The appearance of Harrison's writings will most certainly fill a gap not only in our understanding of black radical and nationalist writings around the World War I period and beyond, but will also change the way in which we look at black thought in general from this period. As Perry clearly shows, Harrison was in many ways pivotal to black intellectual life from the Progressive to the post-war era, and although he was not a formal scholar in the tradition of, say, a W.E.B. Du Bois, it can be said that his editorials and commentary were certainly no less insightful -- and often a good deal more so -- than anything in this vein that Du Bois ever produced in the Crisis Magazine."

Considered more race conscious than the socialist A. Philip Randolph and more class conscious than Marcus Garvey, the St. Croix, Virgin Islands-born Harrison is recognized as a key link in the ideological unity of the two great trends of the Black Liberation Movement--the labor/civil rights trend of Martin Luther King, Jr., and the race/nationalist trend of Malcolm X.

Growing up entirely among working class people and raised in a working class family, Jeffrey Perry, like many others of his generation, was deeply affected by the Civil Rights and Black Liberation Movements of the 1960's. His interest in social change began during the civil rights era and has continued throughout his life where he has mixed workplace organizing with active involvement in the trade union movement. A Princeton graduate who has a Masters in Labor Studies from Rutgers University as well as a Master of Philosophy and a Ph.D. in History from Columbia University, Perry is currently employed as a full-time Treasurer of Local 300 of the National Postal Mail Handlers Union.

It was while doing research for his doctoral thesis that Perry first encountered the writings of Hubert Harrison. "When I first read microfilm copies of his two published books, "When Africa Awakes" and "The Negro and the Nation, " I was intrigued by the clarity of his writing and the perceptiveness of his analyses," recalls Perry. "I realized I had come across a writer of importance whose writings offered profound insights on the efforts at social change in the United States."

This chance encounter with the intellectual heavyweight of the Harlem Renaissance has absorbed Perry for almost 20 years, yet, it has been an especially rewarding journey for in Hubert Harrison he found a kindred spirit. "My major focuses have been on the role of white supremacy in undermining efforts at social change and the importance of the struggle against white supremacy to social change," he points out. "In Harrison the social activist, I saw there was someone who, more than 80 years ago, offered a profound analysis of the nature of capitalism, imperialism, and racial oppression, and of how the system of racial oppression is central to capitalist rule in the U.S."

With "A Hubert Harrison Reader" now completed, Perry is turning his attention to the first volume of his two-volume biography "Hubert Harrison: The Father of Harlem Radicalism" which will be published by Louisiana State University Press.